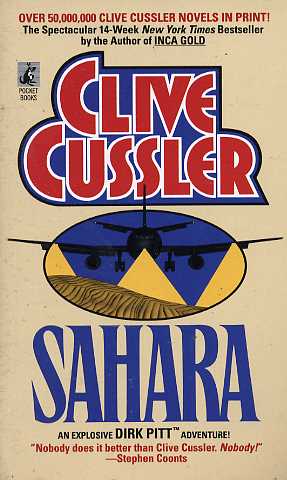 A CIVIL WAR GUNBOAT THAT VANISHED IN 1865...A WORLD FAMOUS AUSTRALIAN AVIATRIX WHO DISAPPEARED IN 1931...A DEADLY TIDE OF POISON THAT THREATENS THE WORLD WITH DOOM!

1996, Egypt. Searching for a treasure on the Nile, DIRK PITT thwarts the attempted assassination of a beautiful U.N. scientist investigating a disease that is driving thousands of North Africans into madness, cannibalism and death. The suspected cause of the raging epidemic is vast, unprecedented pollution that threatens to extinguish all life in the world's seas. Racing to save the world from environmental catastrophe, Pitt and his team, equipped with an extraordinary, state-of-the-art yacht, run a gauntlet between a billionaire industrialist and a bloodthirsty West African tyrant. In the scorching desert, Pitt finds a gold mine manned by slaves and uncovers the truth behind two enduring mysteries--the fate of a Civil War ironclad and its secret connection with Lincoln's assassination, and the last flight of a long-lost female pilot....Now, amidst the blazing, shifting sands of the Sahara, Dirk Pitt will make a desperate stand--in a battle the world cannot afford to lose!
Reviews from Goodreads.com