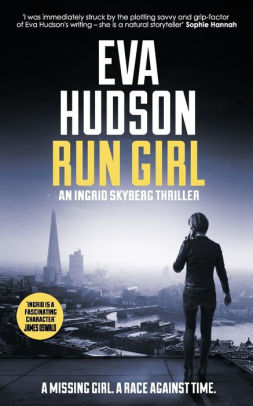 Ingrid Skyberg joined the FBI to bring one man to justice: the man who abducted her best friend when she was fourteen. It’s been eighteen years and she’s never stopped looking for him… or for her friend who has never been seen since.

Now the Secretary of State’s granddaughter has gone missing in London, and it's Ingrid's job to find the teenager. There’s something about girls who disappear that makes Ingrid care more than she should, that makes her lose perspective and take unnecessary risks.

It’s Ingrid’s first time in the city, so she is reluctantly paired with a good-looking and arrogant secret intelligence officer who takes her at break neck speed through the city’s back alleys and corridors of power as they race to find the girl. He’s charismatic and dynamic, but when his methods become dangerously unconventional the two of them clash… in more ways than one.

Run Girl sets the scene for Ingrid’s future adventures working out of the US embassy in London. If an American citizen lands in trouble… or winds up dead… or gets accused of a crime they didn’t commit, Ingrid Skyberg is on their case.

Unlock the thrills and twists of this up-all-night crime thriller series, perfect for fans of gripping mysteries, strong women investigators and any reader who has ever wondered if there’s a female version of Jack Reacher. There is, and her name is Ingrid Skyberg.

Please note: Run Girl is a novella - roughly half the length of an average novel.

After years of enjoying thrillers and police procedurals by authors like Lee Child and Michael Connelly, Eva was inspired to write thrillers herself. In 2011 she won the inaugural Lucy Cavendish fiction prize for her first novel, The Loyal Servant and never looked back.