Return to Me — Rosemary Rogers 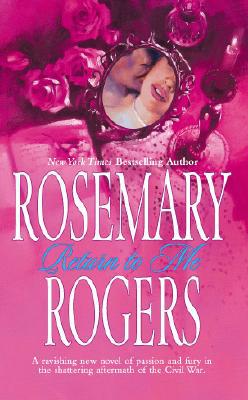 A fragile peace has come to the country in the aftermath of the Civil War, but tensions remain strong in the hearts and souls of those who fought for their land...and for love.

For beautiful, strong-willed Cameron Campbell, the war had one shining spot: dashing Captain Jackson Logan. Though separated by duty for nearly four years, Jackson has come home at last. Cameron, however, has a few plans of her own.This headstrong young woman -- who's unwilling to do any man's bidding -- is determined to return to Elmwood, her family's Mississippi plantation, and reclaim her heritage, stolen by the ravages of war.

A Union spy and decorated war hero, Jackson's legendary air of command served him well as a leader of men. But now he is forced to reckon with a wife as stubborn and willful as he -- and the unexpected return of a woman from his past who has come to claim his love.While his passion is fierce for his beautiful wife, a dark menace forces him into a last crucial mission for his country, and Jackson knows he must also make a final stand for the woman he loves.
Reviews from Goodreads.com