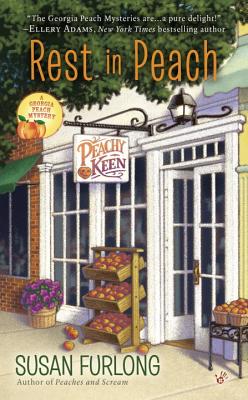 Share:
In the refreshing new Georgia Peach Mystery from the author of Peaches and Scream, an upcoming debutante ball turns into the pits when a juicy murder scandalizes a small town.

The annual Peach Cotillion, Cays Mill, Georgia's biggest event, is fast approaching and Nola Mae Harper is just as excited as the rest of the town -- even though she's busy juggling both the cotillion dinner and the grand opening of her new shop, Peachy Keen. But she never expected that plans for the cotillion would end up in the pits because of the cutthroat competition between local debutantes.

When Vivien Crenshaw, insufferable church organist and despised mother of the town's spoiled-rotten Peach Queen, is stabbed to death, the police turn to Nola's friend Ginny as prime suspect. Apparently the two had fought over a one-of-a-kind cotillion gown. As Nola steps in to prove Ginny's innocence she soon finds herself picking through a bushel of suspects, twice as many motives, and at the mercy of a killer all too keen on killing again.