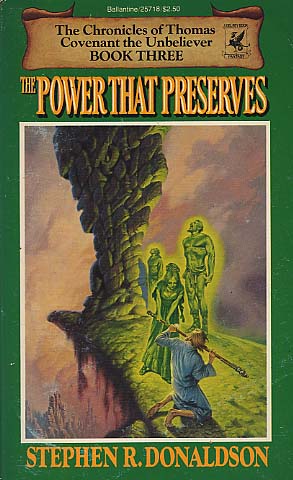 Twice before, Thomas Covenant had been summoned to the Land, the strange other-world where magic worked. Twice he had been forced to join with the Lords of Revelstone in their war against Lord Foul, the ancient enemy of the Land. Thomas Covenant, pariah on Earth, was a reincarnation of the Land's greatest hero, armed with the wild magic of White Gold--and without knowledge of its power!

Now he was back--to a Land ravaged by the armies of Lord Foul. The Lords were besieged and helpless. No place was safe for men. Foul's victory seemed certain. Only Covenant could avert it.

Desperately and without hope, he set out to confront the might of the Enemy. With him went a Giant, a Bloodguard and the madwoman he had wronged. And in Foul's Creche, Lord Foul grew in power with each new defeat for the Land.

The sweeping conclusion of one of the strangest epic fantasies ever written...