Out of the Madhouse — Christopher Golden; Nancy Holder 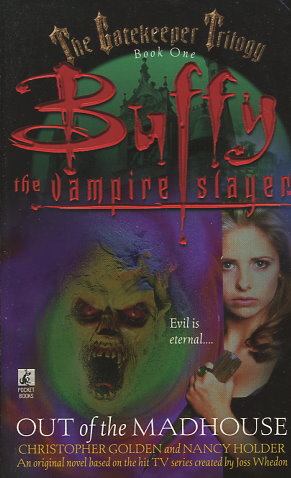 Werewolves. Trolls. Sea Monsters. Rain of toads. Skyquakes. Sunnydale is being besieged by dark forces. But even with Buffy providing her unique style of damage control while Giles is hospitalized out of town, it's more than one Slayer can handle -- especially since the abominations are coming from a centuries-old portal through time and space.

Somehow, the hell-hole must be found and corked at its source. For Buffy, Angel, and the rest of her gang, that means a road trip to Boston where an ailing Gatekeeper resides over a supernatural mansion that has been, until recently, holding the world's worst monsters at bay. Once there, Buffy discovers the catastrophic truth: the magical structure houses thousands of rooms, all of which are doorways to limbo's "ghost roads," and all of which may bring her face-to-face with the most nefarious forces in hell and on earth -- forces bent on horrific plans far worse than the Slayer ever imagined.