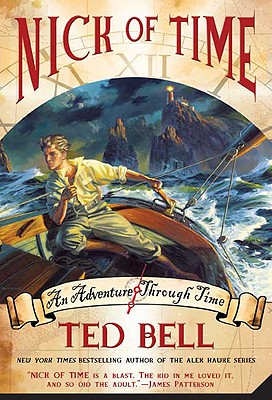 
In the grand tradition of epic novels like Robert Louis Stevenson's "Treasure Island" comes a wondrous tale of time travel, adventure, and riches, in which twelve-year-old Nick McIver sets out to become "the hero of his own life."

The setting is England, 1939, on the eve of war. Nick and his younger sister, Kate, live in a lighthouse on the smallest of the Channel Islands. Nick and Kate come to the aid of their father who is engaged in a desperate war of espionage with German U-boat wolf packs that are circling the islands. The information they provide to Winston Churchill is vital as he tries to warn England of the imminent Nazi invasion.

One day Nick discovers an old sea chest, left for him by his ancestor, Captain Nicholas McIver of the Royal Navy. Inside, he finds a time machine and a desperate plea for help from the captain. He uses the machine to return to the year 1805. Captain McIver and, indeed, Admiral Nelson's entire fleet are threatened by the treachery of the French and the mutinous Captain Billy Blood. Nick must reach deep inside, using his wits, courage, and daring to rescue the imperiled British sailors.

His sister, Kate, meanwhile, has enlisted the aid of two of England's most brilliant "scientific detectives," Lord Hawke and Commander Hobbes, to thwart the invading Nazis. She and Nick must face England's underwater enemies, a challenge made all the more difficult when they discover the existence of Germany's supersecret submarine.

In this striking adventure for readers of all ages, Nick must fight ruthless enemies across two different centuries, on land and sea, to help defeat those determined to destroy his home and his family.