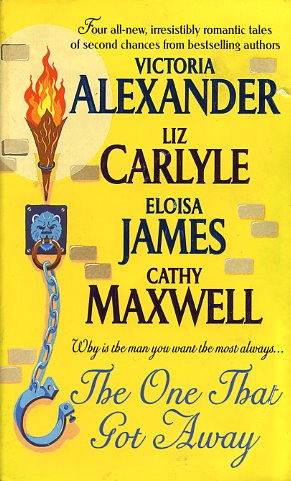 Every woman remembers that one special man who slipped through her fingers, leaving her not only asking the question "What happened?" but also wondering aboutwhat could have been if she hadn't let him go.

Now, four of today's bestselling historical romance writers -- Victoria Alexander, Liz Carlyle, Eloisa James and Cathy Maxwell -- show us what can happen when the man you thought was out of your life forever returns.

In this stirring quartet of original novellas, four sets of star-crossed lovers are given the golden opportunity to relive the passion ... and set the past right. Fate has brought these couples back together, but only love can determine if each is just momentary madness or a reunion that will last for all time.
Reviews from Goodreads.com

The One That Got Away Anthology
The Authors did an excellent job on these stories. You are not sure who the hero is at first or what direction the story will go. They have one suitor that you think is the main character but then a new one shows up. Or it will seem that their lives have such huge chasms between them that there can be no bridges, but with love there is always a way.

The Trouble With Charlotte by Victoria Alexander
Marcus Pennington is close to falling in love with Charlotte, a widow of six years. He is relaying his story to his friend, Reggie, a month after the incident. Both Reggie and Marcus are from the Effington Series. Just as Marcus shares a wondrous kiss with Charlotte her dead husband walks back into her life. Will she give Hugh Robb a second chance? Another great read from Victoria.
**Sexual situations.

Much Ado About Twelfth Night by Liz Carlyle
The war hardened Edward Addison is now burdened with bringing back Sheridan to it's former glory after his brother Reggie had run it down and put it in debt. As the new Earl it now fell on his shoulders.

Sophie has cared for Edward more then she even realized. He once asked her to marry him eight years ago but she knew like all things, he was doing it out of duty. Now they are heading to a house party at Sheridan and she is hoping to buy a prized racehorse from him that his brother had overpaid for just to have, Twelfth Night.

Between intercommunicating and eavesdropping that was misunderstood Edward and Sophie just don't seem to connect even though they really both want the same thing. Great story.
**Sexual situations.

A Fool Again by Eloisa James
Genevieve had fallen for her neighbor when she was eighteen. Where she was taught to be lady the Darby boys were mischievous and always having fun. So she went off to Gretna Green with Tobias only to be caught by her father before they get there, but not before she was ruined, Tobias never offered for her and she was married off to a stingy old man instead. Now she is a widow but must marry a man of his choosing to keep any inheritance. So she chooses Felton. And then Tobias returns. Can she give up being the sophisticated lady she striven so long for or will the passion between Tobias and her reunite?
**Sexual situations.

Nightingale by Cathy Maxwell
When the love of Sir Dane Pendleton marries another, it sets him on a course that hardened his heart and gained riches. Whereas Jemma ended up in poverty after the death of her husband who did not handle his money well. With all his wealth it seems he is still empty. Can Jemma and Dane find their way back to each other after ten years of choices that took them further apart?
**Sexual situations.
http://justjudysjumbles.blogspot.com/2011/08/victoria-alexander-books.html 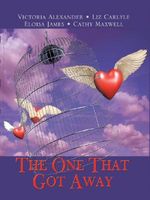