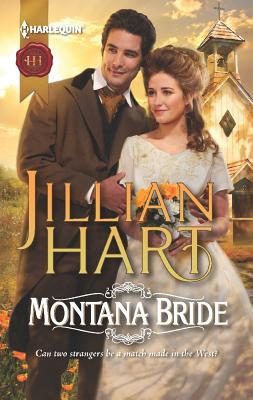 Willa Conner learned a long time ago that love is only in fairy tales. Left widowed, pregnant and penniless, Willa's last hope is the stranger who answers her ad for a husband.

Austin Dermot, a hardworking Montana blacksmith, doesn't know what to expect from a mail-order bride. It certainly isn't the brave, beautiful but scarred young woman who cautiously steps off the train….

Trust won't come easily for Willa -- it's hard for her to believe she's worthy of true love. But she doesn't need to worry about that, because this is just a marriage of convenience…isn't it?
Reviews from Goodreads.com

Montana Bride by Jillian Hart
Willa Conner would never willingly marry again but after finding herself widowed, penniless, pregnant and homeless she had no choice but to advertise for a husband. From her lonely years of having a mother and grandmother that resented her to the past two years married to Jed, who was a mean drunk, she no longer trusted nor did she believe in the fairy tales that real love existed in this world.

Austin Dermot finally had a bride of his own. She was a beauty as well. All his dreams were coming true after his long wait for a woman to love and be loved. His dreams were quickly shattered when he found his Willa was as skittish as the abused mare in his barn and she didn’t believe in love. His bright future suddenly looked pretty gloomy.

Jillian really brings out Austin’s character and emotions. Teardrops fell early on as Austin’s heart was shown in his thoughts and dreams and seeing how much he wanted to be loved. It’s easy to understand Willa as well, eighteen years of being treated like she was nobody wasn’t going to change overnight. There is a lovable bovine, an extremely spoiled gelding and a shy mare who’s life reflects Willa’s as far as needing to be gently loved to gain trust. Another excellent book by Jillian Hart.
http://justjudysjumbles.blogspot.com/2011/08/jillian-hart-harlequin-books.html#