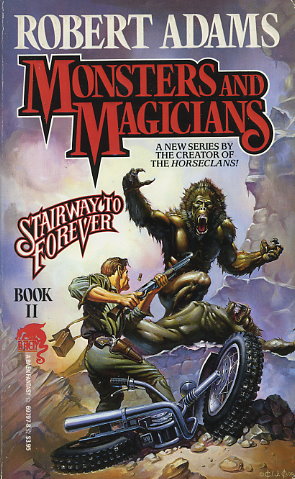 FOR A POOR, DOWN-ON-HIS-LUCK EX-MARINE, FITZ WAS DOING OK

It all started when "Fitz" Fitzgilbert tumbled down a certain STAIRWAY TO FOREVER -- and found himself in another world. At first it had seemed a world that offered only infinite loneliness, a world of nothing but ocean, sand, and inland desert. But before long this "empty" world had granted Fitz incredible wealth, the love of a beautiful soulmate, godlike telepathic and telekinetic powers-in short, a life of pure and joyful adventure.

But the time of play is ending now. The Elder Gods who called him to this world grow impatient for Fitz to take up the burdens of kingship for which they have summoned him. And though he loves the life he has been living, and does not want to be a king, Fitz learns that for him there is no choice: he must live as a king if he is to live at all.