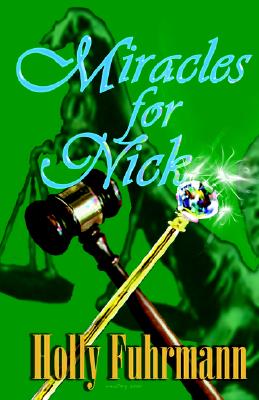 Miracle on Thirty-fourth Street meets The Brothers Grimm
in this mad-capped adventure in fairy legalities and love!

Nick Aaronson is a lawyer who doesn't believe in fairy-tale romance. He doesn't even believe in fairies, but they believe in him! Myrtle, Fern and Blossom are back, and they have one last Aaronson to find a happily-ever-after mate. And they're determined Nick is going to be happy...whether he wants to be or not.

Glory Chambers thought she was leading the perfect life until she discovers it was a fairytale she'd invented for herself. When a mysterious aunt leaves her a diner in Erie, Pennsylvania, Glory's ready for a new start. But she hadn't planned on Myrtle, Fern and Blossom--they're more adventure than anyone is ready for, even a disgruntled ex-corporate executive. Glory unwittingly hires them and finds that her life is turned upside down when her fairy employees are sued. Who do you hire to represent three fairies in a civil suit? Nick Aaronson, of course!

Thrown together in the fairy-trial of the century, Glory and Nick draw closer, despite their misgivings. A man who doesn't believe in love, a woman looking for independence, and three fairy godmothers determined matchmake the couple make a dangerous mix. Will Myrtle, Fern and Blossom be able to convince Glory and Nick that they can live happily-ever-after, or will they learn that even magic can't guarantee a...Miracle for Nick?
Reviews from Goodreads.com