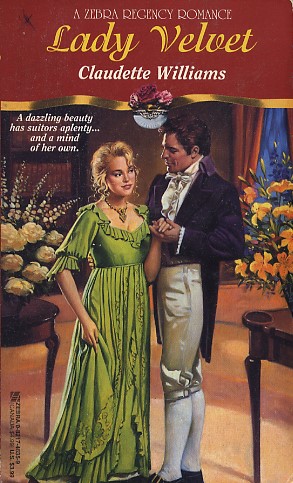 Share:
A dazzling beauty has suitors aplenty...and a mind of her own.

When Lady Velvet made her debut before the discriminating Paris ton, the gentlemen gaped and the Marquis of Talgarth gasped. He had expected the headstrong tomboy he had known in London. Instead, he stood mesmerized by a vision of golden-haired loveliness and dancing green eyes...who soon vanished from view when a stampede of eligible bachelors rushed to her side--nearly trampling the smitten Talgarth in the process!

From across the ballroom, Velvet spied Dustin Talgarth, the "knight in shining armor" who'd filled her girlhood dreams. But instead of kisses, her guardian's grandson was soon giving orders about where she could go and whom she must never see--a certain Lord Farnsworth, to be exact. But Velvet had her own ideas. She just might accept Farnsworth's proposal...unless a certain handsome and stubborn marquis asked first!