King of the Murgos — David Eddings 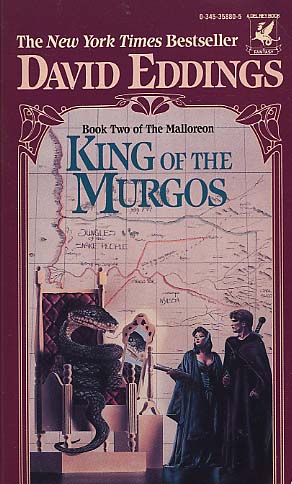 The infant son of Garion and Ce'Nedra had been foully kidnapped. Now they began the great quest to rescue the child, with the immortal Belgarath the Sorcerer, his daughter Polgara the Sorceress, and inevitably the little Drasnian, Silk.

Guided by the Orb of the God Aldur, their way led through the foul swamps of Nyissa, then into the lands of the Murgos. And at the end, they must face a horrible danger--to themselves and to all mankind.

For the Dark Prophecy had not vanished when Garion slew the evil God Torak. Instead, it had fled to Zandramas, who was now the Child of Dark. Dark and Light still contended for mastery, and Zandramas planned to use the child in some rite at the Sardion Stone to insure that the Dark would triumph.

If they could not be at that impossible place when Zandramas arrived, they would lose--forever.

Here David Eddings' bestselling The Malloreon continues as the epic quest begins, across new lands and among strange peoples. A magnificent fantasy of men, Kings, Sorcerers, and Gods caught up in a death struggle between two ancient, warring Destinies--the culmination of a seven-thousand-year war of Good and Evil.