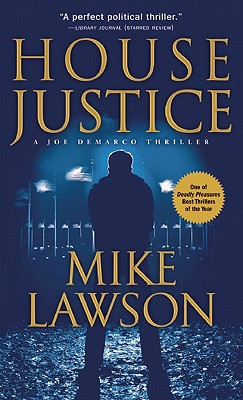 Share:
In his thrillers starring Joe DeMarco, Mike Lawson has made a name for himself as one of the most entertaining and insightful writers focusing on the dirty games played in our nation's capital. In House Justice, an American defense contractor goes to Iran to sell missile technology, and the CIA knows all about it thanks to a spy in Tehran. But the story is leaked to an ambitious journalist and the spy is burned, brutally tortured, and executed.

The director of the CIA isn't about to let the callous sacrifice of his valuable spy go unpunished. DeMarco's boss, Speaker of the House John Fitzpatrick Mahoney has his own reasons to get to the bottom of the leak: he once had a fling with the journalist, and now that she's in jail for refusing to reveal her source, she is threatening to tell all unless he helps get her out.

DeMarco and the CIA aren't the only ones looking for the source of the leak. Someone else wants to avenge the spy's death, and is tailing DeMarco hoping he'll lead him to his prey. House Justice is classic Mike LawsonÂ -- fascinating characters, inside-the-beltway intrigue, and a gripping plot packed with surprises.