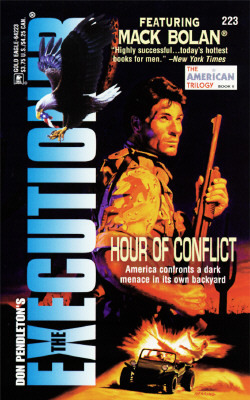 A paramilitary fringe group linked to acts of right-wing terrorism has come under Mack Bolan's lethal assault. One leader is down, but the other. a hard-core mercenary, escapes the firelight in Idaho and regroups with an arms-smuggling religious cult in the Baja desert.

Christopher Stone is driven by a single motive, prepared to kill for money anytime. not caring who picks up the tab. He's already sold out his country to enemies in a conspiracy that could mean the splintering of America.

The Executioner is looking forward to his final one-on-one with Stone. But this time, it will be Stone's turn to pay. In blood.
Reviews from Goodreads.com