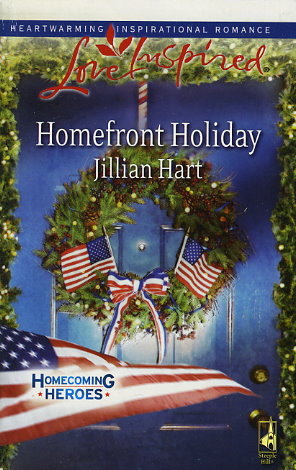 A heart full of love for the orphaned boy he saved from a war-torn country? Check. Adoption forms filled out? Check. Yet M.A.S.H. surgeon Mike Montgomery is barely back on U.S. soil when his plans are squashed. Someone else has already petitioned to adopt little Ali: Sarah Alpert, the boy's foster mother--and Mike's former fiancee. Sarah broke his heart, but he won't break hers by sticking around. Until a little boy puts his holiday wish--for the mom and dad of his dreams--into adorable action.
Reviews from Goodreads.com

This book focused on Dr. Mike, the doctor we met in book 1 as he requested little Ali being sent to the states for heart surgery. We were also introduced to his ex-Fiancee, Sarah. He and Sarah had been together for a long time. They had finally gotten engaged and planned to marry. But then things changed. Mike decided to stay in the army and take another deployment. Sarah gave him a choice: the army or her.

Now he's back with the intention of adopting the little boy who's life he saved. He loved Ali and couldn't wait to make him his son. But when he found out Sarah was adopting him, his world was crushed. Little Ali would have the best parent. If it were anybody else, Mike would fight the adoption, but not Sarah, whom he still loved...

Though this book received top star ratings, I just wasn't as impressed with it. The other books seemed more believable. I didn't understand Mike's reasoning for being so "cold-hearted" or unfilling. The author stated he had never cried in all those years. He didn't want religion. The ending just didn't click with me. I didn't see any heart-change. One minute he was in the chapel fighting it, the next he was on his way to declare his undying love and devotion.

Mike's treatment to ali made me sick. This little boy, whom he claimed to love, had been through hell, yet Nike rejected him because...because...WHY??? I thought he was quite wishy-washy. One minute he wanted to involve ali in his life. The next minute he didn't. Sarah took him back way too easily. She had bared her soul to him several times, and he'd stomped on it. ..

Also, some of the engagements happened to fast. Some of the books eluded to the fact that they weren't going to rush into anything. They would take their time in dating and take things slow. Well...since the entire series was a span of six months and they were all engaged by the end of the series, I didn't really see them taking things slow int he DATING relationship. Don't get me wrong, expect for the final relationship I think they all were in love and am happy to see them getting married...

One final thing: The book stated the adoption process was just about complete on little Ali. How could that be when the couple weren't even married yet?

This is an EXCELLENT series. Every book plays a part in unraveling the mystery and certainly should be read in order to keep from spoiling any surprises. The stories are sweet and true to the Love Inspired books I've come to enjoy so much. These authors did a wonderful job bringing it all together in each book.