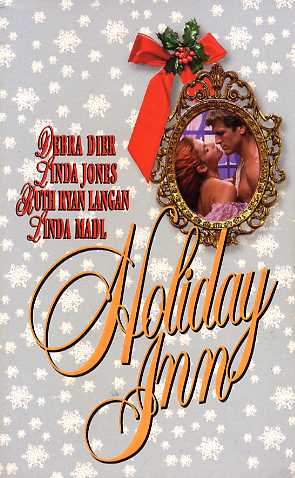 The Freedom Inn--Port Freedom, New Hampshire
Across the centuries, the warmth of its hearth brings true hearts together at Christmastime.

1781
When Alexander Stark left his family's inn to join the War for American Independence, little did he expect to return to the bleak reality of blindness. He was doomed to embittered darkness, unless the beautiful Medora's bittersweet caress could illuminate his world with "Love's Light."

1815
When dashing privateer Eli Whittaker turned businessman, he thought the Freedom Inn would be the perfect place to transact his marriage of convenience. But the fiery Sara Larkfield was determined to fan his pirate's passion into the union of a lifetime--before she could accept his marriage gift of "The Christmas Pearls."

1889
Forcing one's sister into a loveless marriage was less than Rachel Stark's idea of chivalry--and yet the virile T. S. Beauchamp was doing precisely that. The entrepreneur was certainly handsome, but was he valiant enough to prove that he could be not only a breathtaking lover, but also live up to being "Rachel's Hero?"

1996
When successful novelist Adam Holt returned to the inn owned by his childhood sweetheart, Caroline Stark, he knew that this time he would have to capture her heart forever--for without the feisty beauty, his heart could never be truly "Home for Christmas."
Reviews from Goodreads.com