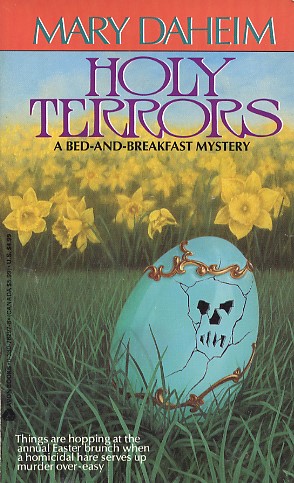 Catering the annual pre-Easter brunch and egg hunt is a hare-raising hassle for Judith McManigle, hard-working hostess of the Hillside Manor. And this year's egg scramble gets particularly messy when the reclusive wife of a local scion is fatally perforated By a fiend dressed in a bunny suit. Never one to pass up a good murder, Judith solicits the help of her sometime-beau policeman Joe and her irrepressible Cousin Renie to get energized and get hopping down the floppy-eared assassin's trail. But soon the list of suspects is multiplying faster than a hutch-full of rabbits. And Judith might very well end up a basket case--or worse--before this whole thing is through...now the party-planning sleuth's unsolicited snooping has put a killer hot on her cottontail!
Reviews from Goodreads.com