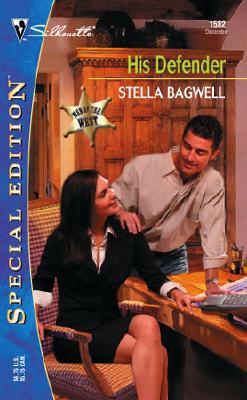 Isabella Corrales refused to fall for her newest client, Ross Ketchum. He was cocky and arrogant, with a devil-may-care attitude and dimples deeper than the Grand Canyon. Nope, she wasn't going to fall for him. Not even when she had to move into his ranch house -- for investigative purposes, of course....

Love-'em-and-leave-'em-smiling Ross knew he hadn't tried to kill his brother-in-law but few others believed him. Isabella was his only hope in clearing his name. Trouble was, close contact with sweet Bella was giving the wary rancher all sorts of strange thoughts -- about tomorrow, and the next day, and forever after with the dark-haired lady lawyer!
Reviews from Goodreads.com

His Defender is a book by American author, Stella Bagwell in the Men of the West series. Isabella Corrales is sent to Ross Ketchum’s ranch to prepare his defence against the charge of the attempted murder of his brother-in-law. Ross doesn’t seem to take the charge seriously, and doesn’t need this sexy lawyer in his life. He has an issue with career-women, and she is obviously one. Bella refuses to become another of Ross’s long line of conquests; he’s told her he’s not a marrying man and she won’t settle for less. Published under the romantic intrigue banner, it is long on romance and short on intrigue. The intrigue is handled awkwardly and solved in a rush in the last few pages. The romantic element is better, but the characters are not strong enough to warrant more than 3.5 stars.