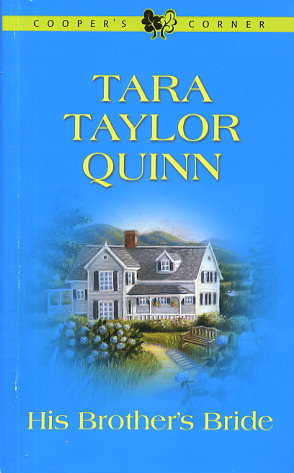 Check-in: TV news reporter Laurel London has booked a room at the new Twin Oaks B and B, and so has noted travel writer William Byrd. Owners Clint and Maureen Cooper are hoping for a great review!

Checkout: Then suddenly, William Byrd vanishes. Policeman Scott Hunter is on the case -- and Laurel is determined to be in on the action. But Scott and Laurel share a painful history. His brother -- her fiance -- died tragically. Can cop and reporter mend their heartbreak, join their hearts...and get to the bottom of Byrd's disappearance?
Reviews from Goodreads.com

His Brother’s Bride is a book by American author, Tara Taylor Quinn in the Cooper’s Crossing series. TV news reporter Laurel London returns to her hometown of Cooper’s Corner some three years after the death of her fiancé, Paul Hunter, to try to come to terms with her loss. When a guest at the B&B goes missing, Paul’s brother, Scott, a policeman currently on vacation, is asked to discreetly investigate. Laurel finds herself attracted to Scott, but feels she is betraying Paul’s memory if she acts on her attraction. Scott feels guilty about his brother’s death and unworthy of his brother’s bride. This mystery romance is 25% longer than the usual Mills & Boon, and it feels like that extra 25% is filling that would have been better left out. The romance is very slow moving and it takes ages for Scott and Laurel to overcome their obstacles; the mystery is quite convoluted, with new characters appearing at every turn. There is a background mystery that remains unsolved and is no doubt picked up in further books of the series, but is not really interesting enough to entice the reader. Quinn has done better.