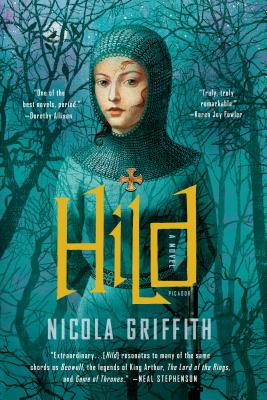 A brilliant, lush, sweeping historical novel about the rise of the most powerful woman of the Middle Ages: Hild

In seventh-century Britain, small kingdoms are merging, frequently and violently. A new religion is coming ashore; the old gods are struggling, their priests worrying. Hild is the king's youngest niece, and she has a glimmering mind and a natural, noble authority. She will become a fascinating woman and one of the pivotal figures of the Middle Ages: Saint Hilda of Whitby.

But now she has only the powerful curiosity of a bright child, a will of adamant, and a way of seeing the world -- of studying nature, of matching cause with effect, of observing her surroundings closely and predicting what will happen next -- that can seem uncanny, even supernatural, to those around her.

Her uncle, Edwin of Northumbria, plots to become overking of the Angles, ruthlessly using every tool at his disposal: blood, bribery, belief. Hild establishes a place for herself at his side as the king's seer. And she is indispensable -- unless she should ever lead the king astray. The stakes are life and death: for Hild, for her family, for her loved ones, and for the increasing numbers who seek the protection of the strange girl who can read the world and see the future.

Hild is a young woman at the heart of the violence, subtlety, and mysticism of the early Middle Ages -- all of it brilliantly and accurately evoked by Nicola Griffith's luminous prose. Working from what little historical record is extant, Griffith has brought a beautiful, brutal world to vivid, absorbing life.
Reviews from Goodreads.com

This is a big, sprawling, behomoth of a book. It is set in 7th century England and it tells the story of the rise of the most powerful woman of her era. Hild was a real person, and her possible rise to power. Not much is known about Hild, but Nicola Griffith paints a very vivid picture of this unforgettable woman. It's historical fiction, but the language, the names of the people, the beliefs of the people of that time are very realistically portrayed. The book is a bit difficult at first to get your head around with all the strange names and the mix of three or four languages that were used at that time, but as you read, it all becomes brilliantly clear and the story unfolds at a very brisk pace. Nicola Griffith's prose is beautiful and stirring. Even the numerous battle scenes are exquisitely written so that it feels like you are actullay there amongst the blood and gore. This is not historical fiction for the faint of heart. It's big and bold and graphic, but warm and real and it's a lovely escape. I highly recommend it for lovers of this genre.