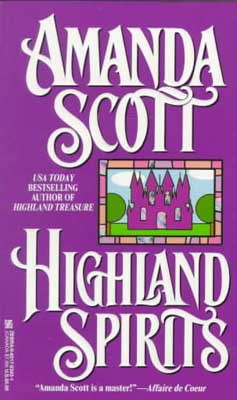 In the stormy wilderness of 18th Century Scotland, a young beauty meets the man of her dreams.
HIGHLAND SPIRITS

He was the darkly handsome man who haunted Pinkie MacCrighton's dreams since childhood, a ghost who wandered the woods with his deerhound near her brother's Highland castle. Over the years Pinkie's imagination had endowed her apparition with many virtues, so that he had become the perfect man against whom she judged all others. But then Pinkie travelled to England for her London Season -- and encountered a brooding stranger she felt a compelling attraction to.

Michael Mingary, Earl of Kintyre, was disturbed by the shy Campbell heiress, and bedevilled by his own troubling dreams of a ghostly Scottish castle. But he couldn't afford to be distracted from his family's crushing debt to the Campbells. An arranged marriage between his sister and Pinkie's wealthy brother seemed the only way out, until Pinkie made an outrageous proposal of her own to this man she barely knew -- gambling everything on a magnificent dream of love.
Reviews from Goodreads.com