Hidden in the Everglades — Margaret Daley 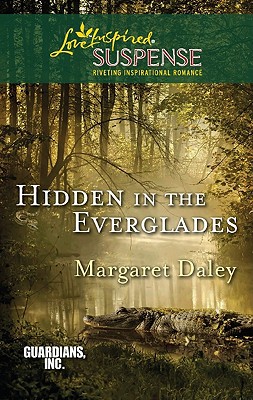 Bodyguarding is Kyra Morgan's business -- but this was supposed to be a vacation! Still, she can't refuse the request from childhood friend and neighbor Michael Hunt. Michael's sister Amy ran away after witnessing a murder. Michael needs Kyra's help to find her and keep her safe. Yet as Kyra and Michael follow the trail along the Florida coast, their search grows more dangerous by the day. Terrorists are at work, and the stakes are perilously high. It will take everything they have -- including trust they're both reluctant to give -- to escape the Everglades alive...
Reviews from Goodreads.com

Kyra Morgan used to be a cop, but now runs her own all-woman bodyguard agency. She's on a much needed break, but what she thinks is going to be a relaxing vacation turns deadly when two men are murdered almost right in front of her. She soon finds herself int he middle of a murderous chase as the remaining witness, a sixteen year old girl, is running for her life. She assists her brother, Dr. Michael Hunt, in finding her and getting her to safety.

She had known Michael years ago. He was the kid brother of her best friend who used to bug her. Now, still five years younger than her, he had a different appeal. She was falling in love with him! But the good doctor had his own issues. He was burned out from doctoring and had lost his girlfriend in a car accident. Now he was taking over the raising of his teenage sister after his older sister went into missions.

The action took place in the everglades. It wasn't as exciting as I expected, but it was still interesting to read how the rescue took place. The conclusion was a bit weak, compared to other LIS novels I've read. The romance was a bit stifled, but the two got together at the end, so I guess that made up for some.

I really liked Amy (?), Michael's sister who was running. She had it rough - lost both of her parents when when she was quite young, being raised by her sister, than having to adjust when her brother took over her raising. She did a lot of things wrong, but I'm sure her brother sternly disciplined her in the end and they all lived happily ever after...