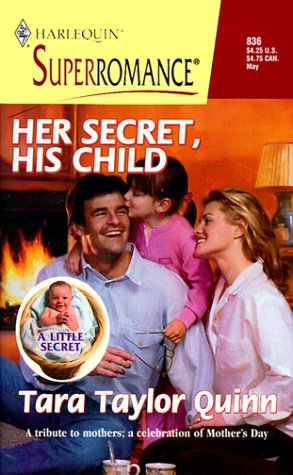 Jamie Archer loves her four-year-old daughter, Ashley, more than anything in this world. But Jamie has a past she's ashamed of, a past she needs to keep hidden. So she's created an entirely new life for herself and Ashley - a life that's threatened when Kyle Radcliff reappears. Klye doesn't immediately realize who she is, but Jamie recognizes him right away. He's Ashley's father. Even though he doesn't know it... For Ashley's sake, for all their sakes, James has to tell him the truth - something that seems to become harder every day. Because she's falling in love with him. For the second time...
Reviews from Goodreads.com

Her Secret, His Child is the first book by American author, Tara Taylor Quinn in the Little Secret romance series. This is the classic “secret baby” plot with a few interesting twists. Accountant Jamie Archer is the single mother of four-year-old Ashley, and they have a happy life in Larkspur Grove, Colorado. Then Jamie gets a call from Kyle Radcliff, and suddenly their secure little world is threatened. Kyle is the father that Ashley has been longing for, but doesn’t know exists. And that ignorance is mutual. But when he sees Jamie again, he knows exactly who she is. But her doesn’t know all her secrets, and Kyle has some of his own as well. Quinn’s characters have depth and appeal; she includes a subplot with Jamie’s neighbour Karen, which bulks up the story to its added length. Jamie’s drastic action at the climax is somewhat unrealistic; other than that, this is a sweet romance that also touches on child abuse and prostitution, but still manages to have a happy ending.