Her Only Hero — Jo Ann Ferguson 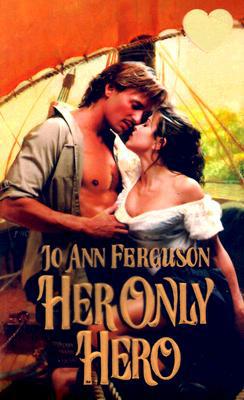 CAN A DAMSEL IN DISTRESS...
After several months of silence, Arielle Gardiner at last receives a letter from her fiance, imploring her to join him in Nicaragua. Even though Captain Stephen Lightenfield has refused to take Arielle to a land that is on the brink of war, she stows away on his ship. But when the arrogant captain discovers Arielle, making her his prisoner until he can safely return her to Boston, their close quarters stir a passion she's never known. Now if she doesn't find a way to escape soon, the captain's lingering kisses may very well keep her heart hostage forever.
...FIND THE HERO OF HER DREAMS?
Stephen knew the dark-eyed beauty was trouble the moment he met her. The war-torn jungle was no place for a stubborn schoolmarm with visions of romantic rescue in her head. It would be his duty--and his pleasure--to teach the impetuous Miss Gardiner a lesson about the consequences of her actions. Judging from her delicious response to his touch, she would prove an apt pupil. Yet much to his surprise, the captain was also in need of a lesson--about the sweet torment of desire and love's mysterious ways.
Reviews from Goodreads.com