Her Highness, My Wife — Victoria Alexander 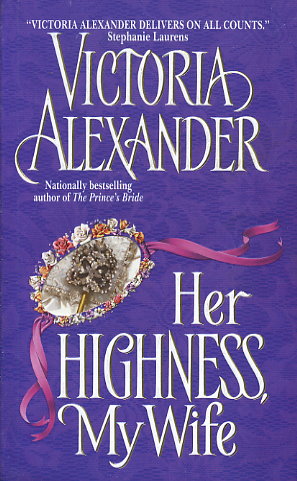 Once upon a time there was a kind and beautiful princess. She had lovely gowns, servants to do her bidding...and a bevy of handsome suitors longing for one thing only...Her crown.

Women never said no to the dashing Lord Matthew Weston and he never said no to them. But this was the first time he found one tempting enough to impetuously say "I do." Was it any wonder he awoke to discover her gone? And when Matthew learned the enchanting creature he'd married was of royal blood -- and would abandon their marriage bed without a second thought -- he vowed to put her out of his life forever.

But even a princess makes mistakes. And now Tatiana's back, asking for the kind of help only he can give her. But is his assistance all she wants or are there secrets the willful royal is keeping from him? Matthew may well lend her his hand but he'll never again give her his heart. Still, he's determined to tame the green-eyed beauty and change her from a perfect princess to his passionate bride.
Reviews from Goodreads.com

Partial review from The Romance Reader:

Princess Tatiana Marguerite Nadia Pruzinsky of the Kingdom of Greater Avalonia has come to England to find the Heavens of Avalonia, a set of fabulous jewels set in a golden cuff. They symbolize the right of Tatiana's family to rule and, as hereditary princess, it is her right to wear them and her responsibility to take care of them. Unfortunately, Tatiana has discovered that the Heavens in her possession are fakes; the originals left Greater Avalonia with the last hereditary princess, Sophia, when she fled to England for her own safety during an attempted coup.

For help in finding the jewels, Tatiana approaches Lord Matthew Weston, the youngest son of a marquess and the man with whom she shared six blissful days and nights of love in Paris, fifteen months, three wees and four days ago. The two married in a civil ceremony, but their idyll ended when Tatiana disappeared, leaving only a cryptic note saying that she had "responsibilities and obligations" she could no longer ignore and that she would have the marriage annulled.

Now, she asks Matt to pretent that they're married so she can approach the members of the English aristocracy she thinks might have information about Sophia. The subterfuge is necessary, of course, because she's concerned that dealing with a minor princess from a little country from somewhere in central Europe will intimidate the dowagers of some of England's most powerful families.