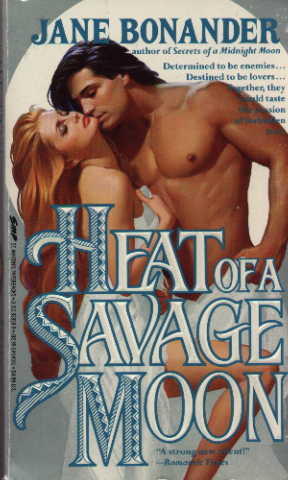 No sooner had Rachel Weber arrived as a new bride in the rugged frontier town of Pine Valley, her husband was brutally murdered by Indians. Though she'd scarecly known him, Rachel felt compelled to find her husband's killers and bring the to justice, even if it pitted her against Pine Valley's most formidable citizen, Jason Gaspard, a man who made Rachel tremble with fear - desire.

Proud and angry, he had no use for the delicate Widow Weber. And her horror of "savages" drove him to fury - for cultivated, educated Jason was part Karok Indian. Yet russet-haired Rachel, with her lush body and sensuous innocence, tempted him as no woman ever had.

He was fighting to protect the heritage of his people. She was determined to solve the mystery of her husband's murder. They were destined to be enemies, but son they would be swept up in a whirlwind of danger and desire - unable to resist the ecstasy of forbidden love, and unable to deny the fiery heat of a bold and breathtaking passion.
Reviews from Goodreads.com