Heart of a Cowboy — Margaret Daley 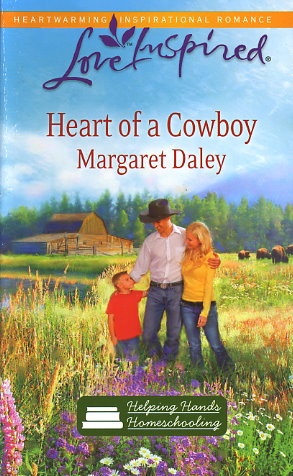 Ten years ago Jordan Masterson left her hometown heartbroken -- and pregnant. Now, yearning for connection with her family, the single mother returns to Tallgrass, Oklahoma. But she's shocked to find her son's father -- unaware he has a child -- a vital part of the community. Zachary Rutgers owns the ranch that the local homeschoolers use for riding and recreation. Which means little Nicholas, Jordan and Zachary will be spending a lot of time together. Jordan must tell Zachary the truth about their son -- and ask for answers herself. Hoping the heart of her cowboy will still be hers for the taking.
Reviews from Goodreads.com

First of all, let me start out by saying that I was in a situation simular to Jordan's. My boyfriend had left me and I found myself pregnant. I tried contacting him but he wouldn't answer my calls. I talked to his mother instead. I made sure HE knew he I was having his baby. I didn't give him a choice - just so we'd be clear. He rejected his child.

With that said, I have mixed feelings on Jordan. Jordan acted like the victom all throughout this story, and I'm sorry but I just could not feel sorry for her. She had no right in keeping her son from his father. It was her duty to make sure Zachary knew he was a father. Leaving a message with his family for him to call her was not good enough! I felt so sorry for Zachary and the ten years he missed. As a parent, I wonder how it would feel if I had lost ten years of my son's life because nobody bothered to tell me he existed (women are lucky in that usually they know...) I think that every moment Zachary was allowed to spend with Nicholas was a blessing. The lawyer crack was a bit harsh, but I could see it coming - especially when she babied her child like she did! But many kudos to Zachary for standing up for his parantel rights on more than one occasion.

With that said, I also felt sorry for Jordan at times. I could not imagine having my child, now eleven, suddenly wanting to spend time with his father who he's never met. It would be very difficult. Though I tend to be overprotective, I usually put my son in my parents care and allow them to use their judgement because I KNOW mine is tainted by my protectiveness. I know Jordan had it rough with a critically ill child, then almost loosing him BUT I also think she was wrong in keeping this from a man who would have done anything for his child!

I don't know that this couple should have rushed right into marriage. They had a lot of baggage, and I think I would have enjoyed the ending more if they had agreed to dating for awhile and maybe setting up counseling with their pastor to make sure they are able to seek true forgiveness/repentance. The ending was a bit too fairy-talish.

Still, I found myself not wanting to put this book down. I absolutely LOVED Nicholas and Zachary. I thought they made a great team!