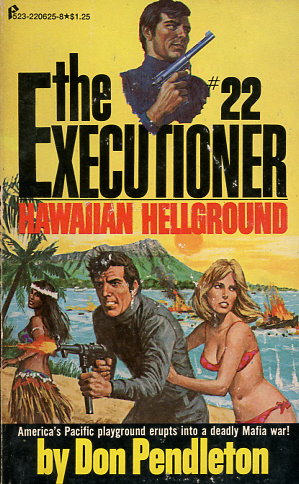 The big picture window at the north wall popped and vibrated as something sizzled into that room and exploded into the face of Puli's escort, jerking the guy like a rag doll and sending pieces of him spraying everywhere. The window popped again before the lithe runner could fully comprehend what had occurred, and with that one the guy at the telephone was flung across the room in another shower of blood.

Pull instinctively hit the floor and hugged it as the window continued to erupt and a seemingly eternal fusillade of heavy bullets demolished everything within reach.

When it was over, the silence was even more ominious than the preceding chaos. Two men lay gruesomely dead almost at Joey Puli's outstretched fingertips. The entire room was a wreck. Puli was aware that his fingers were stiff and aching, and that he had wet himself.

Then another miracle was quickly borne in on Joe Puli's trembling awareness -- he, Joey Puli, was a very, very lucky man. He had lived through two hits by the most fearsome son of a bitch in Puli's dark world.

The Executioner had come to Hawaii.
Reviews from Goodreads.com