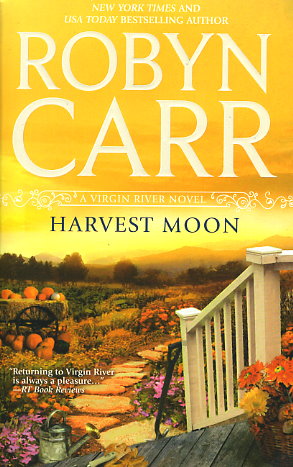 THE RECIPE FOR HAPPINESS:
MAKING IT UP AS YOU GO ALONG

Rising sous-chef Kelly Matlock's sudden collapse at work is a wake-up call. Disillusioned and burned out, she's retreated to her sister Jillian's house in Virgin River to rest and reevaluate.

Puttering in Jill's garden and cooking with her heirloom vegetables is wonderful, but Virgin River is a far cry from San Francisco. Kelly's starting to feel a little too unmotivated...until she meets Lief Holbrook. The handsome widower looks more like a lumberjack than a sophisticated screenwriter -- a combination Kelly finds irresistible. But less appealing is Lief's rebellious stepdaughter, Courtney. She's the reason they moved from L.A., but Courtney's finding plenty of trouble even in Virgin River.

Kelly's never fallen for a guy with such serious baggage, but some things are worth fighting for. Besides, a bratty teenager can't be any worse than a histrionic chef...right?
Reviews from Goodreads.com

Ask anyone in my family and they will tell you that I hate bananas. I'm no fan of their cloying sweetness no matter what nutritional value they hold. Every once in a while, I will eat one just to make sure that my opinion still holds. Suffice it to say that, even though I tried really hard to like Robyn Carr's Harvest Moon, I felt like I had eaten a banana

This Virgin River book was promising at first, with overworked, overstressed Kelly Matlock's having a breakdown. Being a fan of Food Network, I was immediately drawn into her hectic, competitive world of high-end restaurants. I felt the pain and strain of a woman operating in a man's world, struggling to stay in the game and make a name for herself. (You go, girl!) However, when she runs off to recuperate with her sister in Virgin River, things slowly descend into an unending spiral of cloying sweetness.

Doped up on anti-anxiety and blood pressure medicine, Kelly downs a couple of martinis at the local bar and meets blond hunk Lief Holbrook. Of course, he is immediately smitten with her and must drive her home due to her highly inebriated state. Lief is widower with custody of his troubled stepdaughter, Courtney. Romance ensues; Courtney doesn't like it (you fill in the rest of the plot here).

What bothered me most about Harvest Moon was, aside from the mild sexual tension, that the conflict was so low key it was almost non-existent. I don't want to give away the whole story but let's just say that a wholesome friend, some counseling and horseback riding lessons doesn't cure every troubled teen in less than a year. I also had trouble with the civility of Kelly and Lief's relationship. On one hand they're hot and heavy, and on the other, they are the epitome of restraint. Think:

Really? Is that how sexual tension works? I don't think so. This is the sickly sweet stuff that makes me gag. Don't get me wrong, I read the whole book and parts were enjoyable, but when no one is believably ill-tempered or demanding or insecure or displays any number of human frailties in all their ugliness, I feel cheated.

Perhaps I picked up the wrong Virgin River book. Perhaps other titles have more pathos. But, like eating a banana, it's going to be quite a while before I try one again to check if I still don't like it.