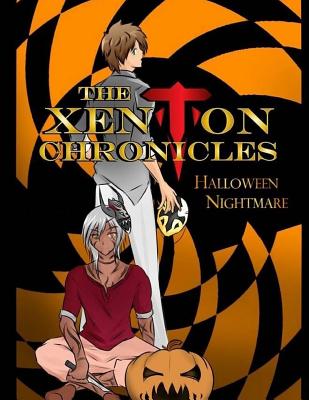 Share:
It's a grudge match. Superheroes Vs. Demons! Demons Vs. Superheroes! Halloween is rapidly approaching and something strange is happening in the city of Beach Shores. A witch begins to wreak havoc, but who is she and what is she looking for? Of course only our heroes have the power to stop her. To further complicate things, a boy appears claiming to be the son of a Demon from Hell, but can he truly be trusted? Griflore is still unaccounted for, putting our heroes on edge. With all this strangeness happening around them, the Xenton can only conclude that something big will be going down Halloween Night. An interlude story set in the Jenshia Star; our heroes are just now getting use to saving the city from Griflore. After a cataclysmic battle with the Xenton, Griflore has gone into hiding, leaving Dye and his siblings, Jason and Sam, to wonder if he will ever return. However, fighting supervillains are one thing; fighting demons head on is another. Can our heroes stop another catastrophe before it even happens, or will the fires of Hell consume the world? This ten chapter novella will throw you back to the beginning of the Xenton Chronicles as our heroes take on a different, more powerful foe.