Guardians of the West — David Eddings 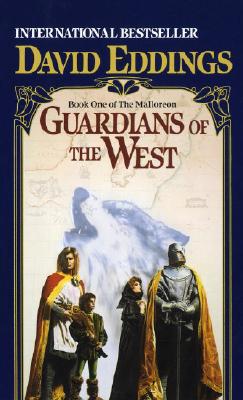 Garion had slain the evil God Torak and been crowned King of Riva. The Prophecy was fulfilled--or so it seemed. While the strange child Errand was growing up in the Vale of Aldur with Polgara and Durnik, showing only occasional flashes of inexplicable knowledge and power. Garion was learning to rule and to be the husband of his fiery little Queen Ce'Nedra. Eleven years passed.

Then suddenly the Voice of Prophecy cried out a warning: "Beware Zandramas!" Not even Begarath the Sorcerer knew who or what Zandramas was. But Garion discovered hints in a previously obscured part of the Mrin Codex. Worse, he learned that the Dark Prophecy was still waging its ancient struggle against the Prophecy of Light. Again, great evil was brewing in the East. And again, Garion found himself a pawn, caught between the two ancient Prophecies, with the fate of the world somehow resting on him.

Here in the eagerly awaited sequel to David Eddings' bestselling The Belgariad, is the first book of The Malloreon, an epic quest across strange lands and among stranger peoples--a magnificent fantasy of men, Kings, Sorcerers, and Gods caught up in the culmination of the seven-thousand-year war between two opposing Destinies to determine the fate of all creation.