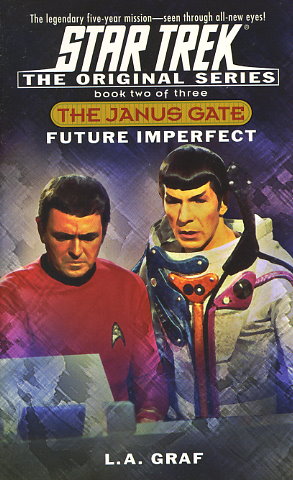 Share:
Capt. James T. Kirk's historic voyages have seldom been recorded from the vantage point of those who served "below deck" on the Starship Enterprise NU-1701. This new trilogy reveals the courage and dedication of the men and women who constitute Kirk's crew, as well as the unearthly dangers faced by any who dare to explore the final frontier!

On a desperate rescue mission to recover their missing captain, the shuttle Copernicus and its crew have become lost in time and space, transported by a powerful subspace vortex to a hellish future time line where the brutal Gorn Hegemony has all but conquered the United Federation of Planets. Stranded on a transformed Federation colony, now a Gorn mining world worked by oppressed human slaves, Helmsman Hikaru Sulu meets an older version of a man he barely knows, Pavel Chekov, who now leads a ragtag band of freedom fighters against the Gorns.

Teamed together for the first time, Sulu and Chekov must struggle to survive in a future that should never have happened!