From the Shadows — Rebecca York 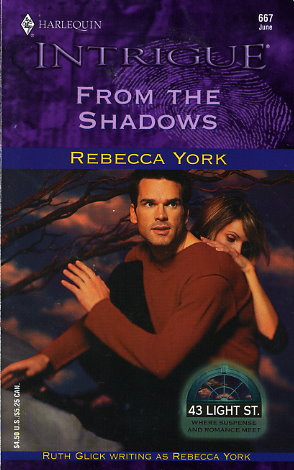 Much of Alex Shane's teen years were forgotten -- but his one intimate encounter with Sara Delaney was crystal-clear in his memory. Sweet Sara who'd been too good for the bad boy he used to be. But the tables had turned now: Alex was investigating a possible murder -- and Sara was his prime suspect.

Though she hid her share of secrets, she claimed her innocence with her every breath.What she couldn't hide was that she craved Alex as much as he wanted her.

Either way Sara was a danger. Alex was either harboring a criminal...or enticing the only woman who could find her way to his hidden heart.