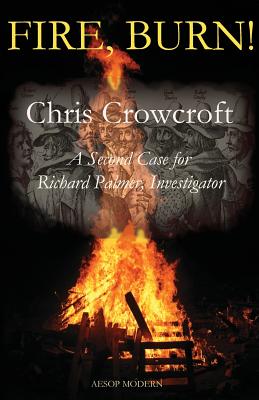 Share:
Fire, Burn! is the sequel to Chris Crowcroft’s highly successful and well reviewed historical thriller Shakespeare in Trouble, featuring the Elizabethan investigator, Richard Palmer.
It is now 1605 and intelligence sources are warning that Catholic terrorists, angry at a new regime’s reluctance to grant religious toleration, are planning a violent event, but not who or when. Robert Cecil, Chief Minister under the new King, James Stuart, calls Richard Palmer in for a second time.
Palmer must infiltrate the insurgent network, including its underground Jesuit priests led by Fr. Henry Garnet, and investigate a playwright who has converted to the old faith and is keeping dangerous company. Ben Jonson is another case of when the playhouse and politics collide.
Palmer sets off on a trail which leads him onto Oxford and into the Midlands in pursuit of the bombers, one of whom, the ex-mercenary Guido Fawkes, prompts a strange sympathy in him. Yet again William Shakespeare appears from Stratford, where the plotters are gathering, anxious to keep his colleague Jonson out of trouble. So does Emilia Bassano, his onetime lover...
About the author
Chris Crowcroft travelled the world as an army brat. Educated at the Duke of York’s Royal Military School, Dover and at St Catherine’s College, Oxford, after teaching English in Verona he made a career in London in the arts and in politics. He is a former trustee of the Friends of Shakespeare’s Church, Holy Trinity in Stratford-upon-Avon where Shakespeare lies buried.
Reviews of Palmer’s first case Shakespeare in Trouble
‘A stunning debut’ -- John McLaren
‘A must-read’ Peter Bassano
‘An intriguing twist on the Shakespeare tale’ Simon Tait, ai magazine
‘May we see Palmer on another case? I hope so.’ Andy Sawyer, Foundation
Further information
For more reviews and further information on the author and the Richard Palmer series, go to www.chriscrowcroft.com