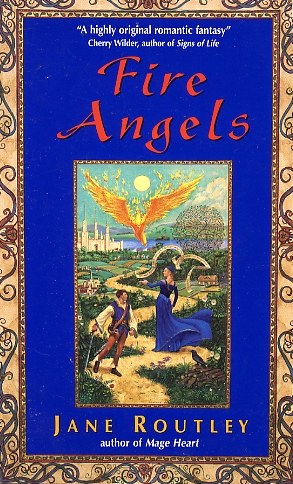 Share:
Like a spectacular tapestry depicting a Renaissance world, Jane Routley plaits threads of bold imagination and solid characterization into the richly textured Fire Angels. In this sequel to her acclaimed debut, Mage Heart, Routley transports us to a flawlessly drawn mystical realm, using vivid language and an eye for exquisite detail as she continues the, magical and romantic adventures of. the powerful young mage, Dion.

Reunited with the family she left behind as a child, Dion finds her cherished homeland of Moria overrun by marauding Witch Hunters and dreaded Fire Angels. She soon realizes that she must use 4i her awesome powers to help save her land and its lei people from the crushing grip of the Great` Destroyer. Finding herself thrust into a morass of it court intrigue, political conspiracy, and furious passion, Dion is forced to confront the deadly, seductive world of demons. Ultimately it is her strength of will, and the pure heart and bravery of the man she loves which will serve as her only weapons against the arch necromancer who would make her his queen.