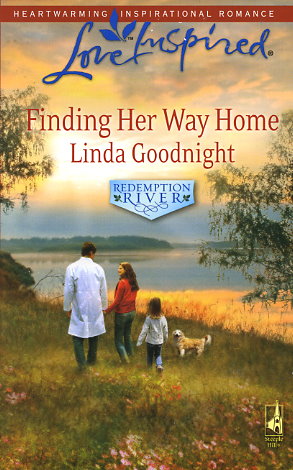 The idyllic little town Cheyenne Rhodes has chosen for her fresh start is almost too welcoming. After all, she's come here to hide from her past -- not to make new friends.

But single dad Trace Bowman isn't about to let Cheyenne hide away her heart. He can't ignore the special way she has with his daughter, Zoey -- or how she's reminded him of the power of real love. Now he needs to convince Cheyenne that Redemption is more than a place to hide -- it's also a way to be found....
Reviews from Goodreads.com

Country vet Trace Bowman had lived in Redemption, Oklahoma for several years now. Like many others, he came seeking redemption for past hurts, and he found it in that little town. Now that he's the only vet, he stays busy with his practice, "farm" calls, and his blind seven year old daughter.

Cheyenne Rhodes is running from her past and thinks a small town in Oklahoma will be just the place to forget. But when she drove into the small town called Redemption, she wondered what kind of town it was. She found herself drawn the the small-town way of life and was able to blend in. But her past was too painful to ever confess to these fine, Christian people!

Characters: Besides these two main characters, there's two eccentric old men named Popbottle Jones and G. I. Jack that I promise you are going to love! Then there's the wonderful little blind girl (Trace's daughter) , Zoey. Throw in an abused woman and a mean man along with a deceased man that's still a very alive character in the book and you have one heck of a story!

Issues: Though other reviewers gave too much of the plot away, I don't want to go into that. I think it's pretty easy to figure out what happened, but I'll never know since I read the reviews!!! This story deals with things such as rape, domestic abuse, blindness, death of a spouse, forgiveness, guilt, and love. The author dealt with these issues in a very satisfying way that left me wanting to keep reading on! The last chapter of the book really puts everything together. I LOVED the way Trace forced Cheyenne to see the truth in the end. He was forceful, yet gentle!

Can't wait to read the next book!