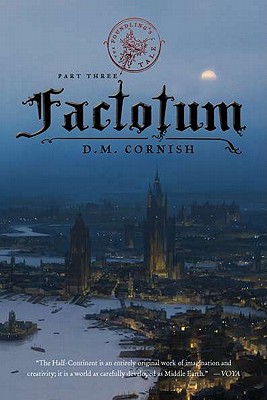 Accused of something worse even than being a monster-lover, Rossamund Bookchild finds himself swept away from ruthless enemies and into the service of Europe, the Duchess-in-waiting of Naimes, employed as her personal factotum. But despite Europe's power and influence as a Peer of the Empire -- and as the most renowned monster-slayer in all of the Half-Continent -- formidable forces move against them both, threatening to capture Rossamund and destroy Europe in the process.

While men plot against them, great forces of nature are also at work; long have the Monster Lords slumbered, indifferent to the onslaught of men. Now Rossamund's search for the true nature of his origins may forever change the way men and monsters live alongside one another. In a world of menace and violence, Rossamund must learn that it is only standing up for what's right that matters.