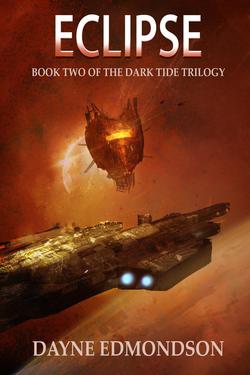 Share:
The Federation burns.
The alien are called the Krai'kesh. Creatures of claws, pincers and endless malice, they ravage the galaxy.
As the war flares, as planets crumble, Admiral Martin Rigsby and his fleet blast into battle. They won one battle at the edge of the galaxy. Their next battle must be fought against the continuous dark tide of the enemy.
Marine Lieutenant Derek Jamison, along with his Eternal allies, must race against the clock to save as many human lives as possible and stop yet another planet from being obliterated.
Elsewhere, Agent Kimberly Hague finds new allies on Crossroad Station as she pursues a lead on the traitors to humanity. But she soon finds herself in grave danger.
The Krai'kesh will not rest until the last human is dead. Martin, Derek, Kimberly and their allies must defeat them. They must win. Or the Federation, and all humanity, will fall. Can they achieve victory?
The second installment in the Dark Tide Trilogy by Dayne Edmondson, "Eclipse" is part of the Seven Stars Universe and set around two thousand years after The Shadow Trilogy.
Buy now and jump into the adventure today.