Each of Us a Universe — Jeanne Zulick Ferruolo 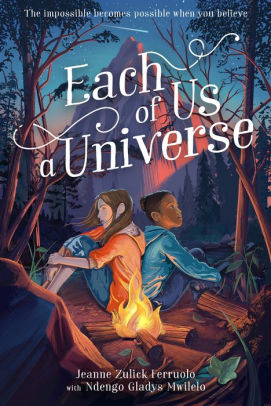 Share:
A heartfelt middle grade from Jeanne Zulick Ferruolo about two girls who go on an adventure to the top of a mountain, and learn about each other, themselves, and the magic friendship can bring, perfect for fans of Katherine Applegate and Barbara O'Connor.

What do you do when you're facing the impossible?

Ever since the day when everything changed, Cal Scott's answer has been to run -- run from her mother who's fighting cancer, run from her father whom she can't forgive, and run from classmates who've never seemed to “get” her anyway. The only thing Cal runs toward is nearby Mt. Meteorite, named for the magical meteorite some say crashed there fifty years ago. Cal spends her afternoons plotting to summit the mountain, so she can find the magic she believes will make the impossible possible and heal her mother. But no one has successfully reached its peak -- no one who's lived to tell about it, anyway.

Then Cal meets Rosine Kanambe, a girl who's faced more impossibles than anyone should have to. Rosine has her own secret plan for the mountain and its magic, and convinces Cal they can summit its peak if they work together. As the girls climb high and dig deep to face the mountain's challenges, Cal learns from Rosine what real courage looks like, and begins to wonder if the magic she's been looking for is really the kind she needs.

Each of Us a Universe by Jeanne Zulick Ferruolo is a glowing story of friendship, inner strength, and what happens when the impossible becomes possible.