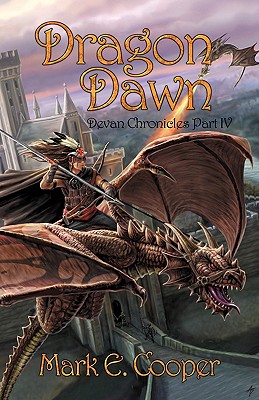 Share:
Her powers won't be enough to win a war. They'll need a miracle.
Julia defends Deva with all she has, but it may not be enough to repel the forces of the cunning General Navarien. Despite her magic, Lucius' wizard spells, and the ruthless fighting skills of the clan warriors, Jihan knows his defeat is inevitable. The only hope is King Gylaren's march to the north.
When Fortress Malcor falls, Jihan can only slow the Hasians down with the blood of his men. It will take a miracle for the King to reach Waldenvale before it's too late.
"Dragon Dawn" is the fourth book in the Devan Chronicles, a sword and sorcery romantic adventure series set in an alternate historical fantasy world. If you like epic storytelling, complex battle scenes, and memorable characters, then you'll love Mark E. Cooper's story of one woman's adventures in the magical land of Deva. Buy "Dragon Dawn" to continue the epic fantasy series today Reading Order: 1. The God Decrees 2. The Power that Binds 3. The Warrior Within 4. Dragon Dawn 5. Destiny's Pawn