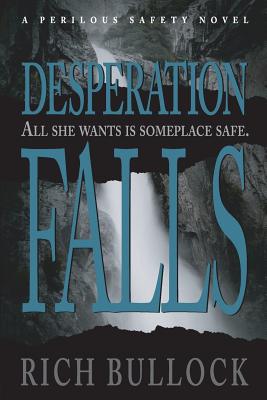 A year after surviving a shocking attack, former Los Angeles cable TV carpenter Lena Blaylock buys some dilapidated fishing cabins on the shore of Storm Lake near California’s Central Coast and fixes them up as rentals. It’s the fulfillment of a dream, and a chance to build a new life free of her violent past. But she never intended sharing this unique setting with mysterious ex-lawman Alex Stone, or damaged teenage runaway Teal Kinshaw.

And she especially didn’t plan on sharing Desperation Falls Camp with a dead body.

As the hot summer progresses, Teal becomes a vital part of Lena’s life. And, after a few barbecues together under the stars, Stone rises several notches from irritating to intriguing.
But when Lena and Teal unwittingly expose information from Lena’s past, it triggers a murder attempt on a friend in Los Angeles. Then a local girl at the lake disappears. Are they connected?
Teal’s own past might be a critical key, but only if she reveals all her ugly secrets. She could lose her new boyfriend, and the by-the-book local sheriff will throw her back into foster care.

Lena and Stone must figure out the connections, because everyone she loves—everything she’s built—is in danger.
Reviews from Goodreads.com