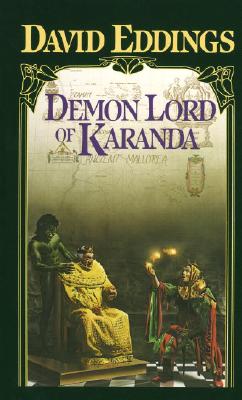 Zandramas had stolen King Garion's infant son and fled to use the child in some ritual that would make the Dark Destiny supreme. Garion and his friends had followed, but now they were captives of Zakath, Emperor of Mallorea, who, while friendly, stubbornly refused to let them leave.

Meanwhile, a horde of demons was ravaging the cities through which they must travel. Zandramas was escaping further toward her goal. And the Seeress of Kell revealed that they must be at the ancient palace of Ashaba within a matter of days or Zandramas would win by default. Then a horrible, fatal plague struck the city of Mal Zeth, closing it against all traffic in or out.

Here David Eddings continues his bestselling The Malloreon, taking the quest across a strange continent and among stranger peoples struggling over the religion of a dead God. A story of ancient, opposing Destinies, battling for control of all men.