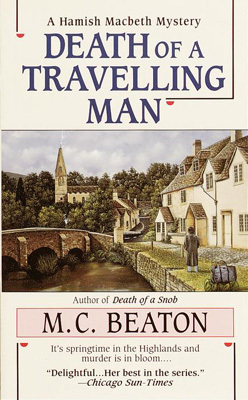 
Hamish Macbeth's life is going to pot. He's been promoted (horrors!), his boss is a dunce, and--to add insult to injury--a sinister self-proclaimed gypsy and his girlfriend have parked their rusty, eye-sore-of-a-van in the village.
Hamish smells trouble and as usual he's right. The doctor's drugs go missing. Money vanishes. Neighbors grow suddenly unneighborly. And when the unsavory newcomer is murdered, Hamish regrets it only because his bones tell him the killer may be one of his friends.
Nobody wants to volunteer even a scrap of useful information, so canny Hamish single-handedly sets about the delicate work of worming the facts out of his neighbors. Yet in the process he uncovers a story so bizarre that neither he nor the villagers may ever recover from it. . . .