Death of a Gossip — M.C. Beaton 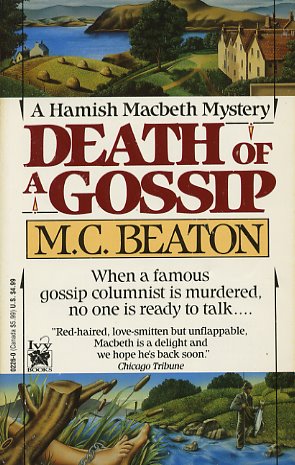 John Cartwright, owner and fishing instructor at the Lochdubh School of Casting in the wilds of Scotland, had a premonition of evil doings. And when the latest class
of anglers appeared, his fears were proved real, in the most unladylike person of
Lady Jane Winters--society widow and tale tattler, who delighted in exposing the all-too-incriminating pasts of the seemingly innocent. Who wouldn't want her shrills silenced?

But when she was actually fished out dead, it was none other than lazy Hamish Macbeth, local bobby and champion poacher, who smelled the right rat. With the inspiring aid of lovely Priscilla Halburton-Smythe, Hamish stuns all with his surprising sense and instinctive understanding of the power of secrets left exposed too long....