Death at the Lighthouse — John Reisinger 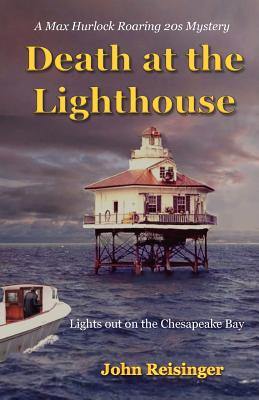 
Nothing much ever happened at the Devil's Elbow lighthouse on the Chesapeake Bay, until the keeper is found dead and splattered with blood from someone else. The police suspect local bootleggers, but Max and Allison Hurlock soon find that the victim had a much wider range of acquaintances, and secrets than anyone knew, including several people who would be very glad to see him out of the way. Soon Max is mixed up with local jealousies, the Coast Guard, a dishonest federal agent, moonshiners, and a mysterious rumrunner boat that seems to have the ability to vanish at will. Meanwhile, Allison meets a woman who apparently can summon the dead, and runs into Houdini himself. Then Max finds that the Devil's Elbow light has another deadly secret. Now Max must find the real killer to keep two childhood friends from being framed for the crimes. Death at the Lighthouse is a Max Hurlock Roaring 20s Mystery. All Max Hurlock mysteries are set in the 1920s and are based on real-life cases from that era. In addition, each mystery contains end notes that explain the real case on which the story is based and give more details about the people and events depicted. Also included are suggested discussion questions for book groups. Other books in the series include Death of a Flapper and Death on a Golden Isle. For more information, visit www.johnreisinger.com