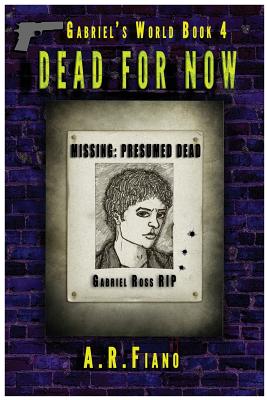 Share:
It's Time to Get Paranoid Brilliant and provocative New York City private investigator Gabriel Ross has a feeling he's being watched. His paranoia is justified--a rogue faction from the sinister Tertullian Society is stalking him. Psyops master Damon Clement has dangerous plans for Gabriel. Gabriel tries to protect his friend and business partner Veronica and his boyfriend Joel, while still secretly exposing the Society's misdeeds. His work in uncovering the conspiracy has sparked a viral protest movement which agitates for answers even as Gabriel and the Society head toward a final confrontation. Dead for Now is the fourth book the Gabriel's World Series and continues the story of Gabriel Ross, a brilliant and intuitive New York City private investigator and fearless, tenacious artist Joel McFadden. Gabriel’s cases take him and Joel to dangerous places internally and in the real world. On behalf of his clients, Gabriel seeks justice while risking his license, freedom, and life. The Gabriel’s World Series features a gay protagonist, bisexual, transgender, and genderqueer characters, and conspiracy, thriller, and dark psychological themes--exploration of the extremes and complexity of good and evil. Each story features the same characters in different but often interrelated cases, and in continuing development of personality and relationships. Each has a stand-alone theme and style, and each story builds upon the previous story and lays the groundwork for the next. Gabriel’s World – It’s Time for New Heroes. Welcome to our World. NOTE: Dead for Now contains adult content including explicit physical and psychological violence, intense situations, torture, strong language, and sexual situations.