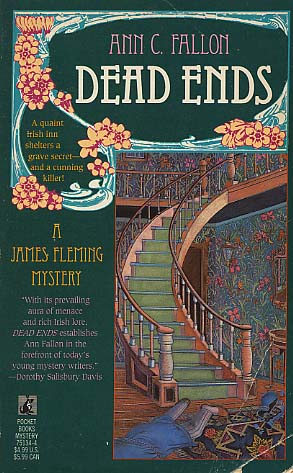 It began with an ordinary drip, just a bit of water seeping through Cromlech Lodge's dining room ceiling. Proprietor Kevin Conlon curses the poor timing, for his posh country inn is just serving tea. But the guests' repast is rather more disturbed when a half-naked man plunges to his death down the lodge's well-worn staircase. The verdict: death by bath salts.

Dublin solicitor James Fleming had been summoned to the one-hundred-fifty-year-old hostelry on this Halloween weekend for a simple task: to draw up the handsome widower Conlon's will. But when the police accuse Conlon of murder, James is at the center of another deadly case.

In the ominous shadow of Ireland's hump-backed Ox Mountains, overlooking Queen Maeve's ancient tomb, Cromlech Lodge plays host to a murderer. And on this eve of Samhain, when the souls of the dead are loosed among the living, James Fleming is determined to solve an ingenious, subtle crime. A long lost diary leads him to a legacy of passion and greed... to past sins and a present danger primed to strike!