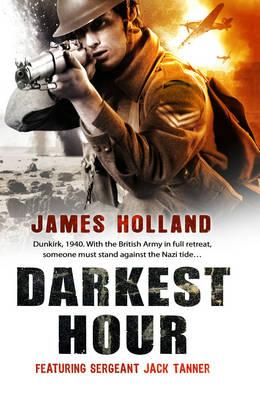 
The second novel in the series featuring Sergeant Jack Tanner.

May, 1940: Following his return from Norway and a short time on coast guard duty in Kent, Sergeant Jack Tanner finds himself in Belgium with the 1st Battalion of the Kings Own Yorkshire Rangers, under Captain Nick Barclay. Their task is to hold the bottom part of the British line along the River Escaut against an increasingly powerful and impressive German army. But, Tanner is dismayed to find that his new Company Sergeant Major is Bill Scrutton — a hard and unscrupulous former thief, and Tanner’s first sergeant in India. Tanner and Scrutton loathe one another.

Soon after his arrival, Tanner is sent on a rescue mission when a Spitfire comes down nearby. The pilot is Captain Barclay’s brother and he has landed just yards away from the German position. Against the odds, and under a rain of machine gun fire and falling mortars, they manage to haul him to safety and retreat to rejoin their Battalion.

But the Battalion has moved, for the Germans have advanced. Tanner and his platoon are stranded. Somehow they must find a way to reach their Battalion and get to Dunkirk; otherwise they will never make it out alive.