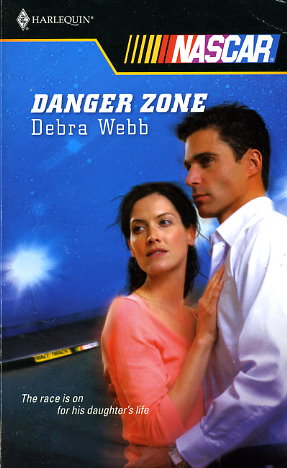 For team owner Buck Buchanan every day at the Huntsville track is a rush. The noise. The dirt. The roar. The furor. NASCAR's golden boy has only one regret: Jenna Williams. Not that he blames her for ditching him twelve years ago, but now she's back and has thrown a red flag.

Jenna is downright frantic, clutching a ransom note demanding a cool million in exchange for her daughter's safety. Their daughter's, actually. Yes, she knows how it looks asking Buck for help. But it's true. The child is theirs and Buck's the only one who can wrench her out of danger.

Even if that means trading himself for a girl he's never known.
Reviews from Goodreads.com

Danger Zone by Debra Webb
NASCAR Series Library
Buck Buchanan is a retired NASCAR driver and owner of Rocket City Racers. He just celebrated his fortieth birthday and never felt more alone. He never was able to move on from his first love, the woman who walked out on him. And suddenly she is there knocking on his door saying she needs him.

Jenna Williams always felt she wasn't a part of Buck's team. She was an outsider and maybe a bit jealous that she couldn't have all of him. When she left….he didn’t follow. Now someone has kidnapped her daughter and there’s only one person she knows who would have the ransom money. The one person she’s been hiding a secret from since she left him thirteen years ago.

In A NASCAR Holiday: Unbreakable, the reader first meets Buck Buchanan in Rush Jackson's story. Danger Zone builds onto the story and teamwork at Rocket City Racers. Respect for their owner pulls the team together to help find Becca, Jenna’s daughter. Can Buck and Jenna become a team and have a second chance as well?
**Mild language
http://justjudysjumbles.blogspot.com/2013/05/harlequin-nascar-library-collection.html